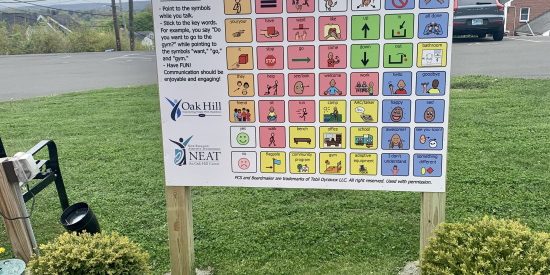 Following a request by Cllr Power, Fingal County Council have confirmed that Communication Boards will be installed at various playgrounds across the county

The boards are primarily a communications support, with particular benefit to children or adults who are either pre-verbal or non-verbal and/or have communication difficulties. Communication Boards, which include picture representations of day to day core words, as well as images that are specifically tailored for its environment and the equipment within the playground where individual boards will be located, are anticipated to help bridge this communication gap for everyone.

The boards represent and offer a unique opportunity for the community to communicate and connect with each other in a new way.

To have the ability to communicate is a necessity and to be understood is essential. Most things we do on a day-to-day basis involves some form of communication – the way we express ourselves, show emotion and develop relationships. There is a basic level and need in all people to be able to communicate with each other. For someone who is non-verbal, or has additional communication needs, however, communication with a person who uses spoken language can be challenging.

In acknowledging this need, regardless of a person’s ability or their restrictions relating to language, I am pleased that FCC will be developing interactive communication boards for various playgrounds in Fingal.”

The idea for the communication board was originally suggested by Ashling Egan – a concerned member of the public, to Cllr. Power. Following Cllr. Lawlor’s representation to Council officials, Fingal County Council liaised with Inclusion Ireland on the appropriate content and a procurement for design has been completed.